I stopped in my tracks in front of her, stunned by her beauty. The breeze teased her long dark locks and her eyes, though sad, shone. The teal of her V-neck dress seemed not too many shades off from the painted statue of a young boy reclining on the bench behind her. 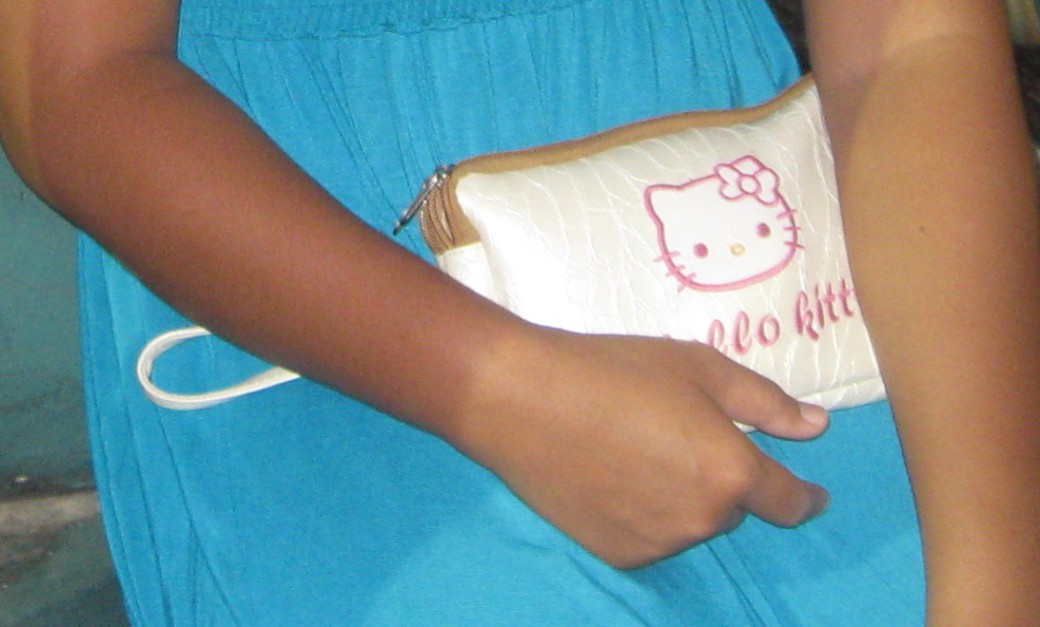 My friend Neil and I had embraced a challenge that evening: to find beauty at night in the darkness of a city that comes alive with its night life. So we had set out, cameras in hand, walking down Beach Road in Pattaya, Thailand… and here in this young woman, I found beauty.

It wasn’t really her outward beauty that stood out to me as I gazed at this young woman… It was so much deeper. She was innocent, somehow. She seemed oddly out of place among the freelancers that were trying to win the heart of a client with their beauty and charm. She did not call out to us. She just sat there, waiting. Waiting for someone to see her.

I called gently to her in Thai, “Beautiful.” Then I raised my camera in a gesture understood universally. I wanted to remember her. She nodded and I took the shot, then sat down on the bench beside her to show her. She nodded at the image.

I smiled and told her in Thai, “Jesus loves you.”

She reached into her Hello Kitty handbag that she had been clutching and pulled out a tract and began speaking intently in Thai to me. When I explained that I didn’t understand because I didn’t speak Thai, she looked wistfully down the road until a friend of hers who spoke both Thai and English came along. “She wants a book about this,” the friend explained. Surprised, I looked to Neil. “Neil, she wants a Bible.” Turning back to the discovered translator, I asked if he could help me get her number, but apparently, that was beyond his ability to translate.

Another Thai man came along and whispered to her something that I could only grasp one word of: police. She bolted with him across the street to the shelter of a bar. Neil and I watched and followed a few moments later. This second man stood with her and a motorcycle taxi driver just outside a bar. We tried approaching again. She turned to her friend and spoke to him in Thai. He explained that she wanted a book about this tract that was circulating from the taxi driver, to someone who worked in the bar, to another friend, to himself. We were able to explain that we had no books with us, but if she gave us her number, we would get her a book and bring it back. She scribbled her name, “Suai,” and number and handed it to me. Neil and I nodded and left, promising to return. We headed back to the hotel, convinced that we would not find a picture more beautiful than that one that night. Part of the way back, Neil sobered. “I can’t just leave her there. We have to go back for her.”

When we arrived back at the hotel, we put a call in to Tamar, YWAM’s outreach to bar girls, but there was no answer. We stood in the lobby for only a few minutes, conferring about what to do, until one of the other teams returned. We convinced their translator, Yai, to go back out with us and headed back to Beach Road.

This time as I looked, I saw so much more…. Many girls just like Suai, standing, waiting. Why not that one over there in red? What was it that made Suai so special? I walked past her at one point, so caught up in the beauty I was seeing. So many souls… all so beautiful and precious. Yet this one, Suai, had won His heart.

We finally found her and sat down with her to talk, though she was nervous about being caught by the tourist police and arrested. She again told us how she wanted a book about God. We all nodded. We hadn’t brought a Thai Bible. We slowly shifted the conversation to ask Suai if she enjoyed her work. She said no. Neil had Yai tell her about the opportunity with Tamar to get a different job, but Suai said she was not able to leave the streets, because she had to provide for her 14-year-old sister, her parents, and her two-year-old son. We kept asking about other alternatives for her, but she kept bringing our conversation back to one thing: She wanted a book.

Suai told us that she had seen us earlier in the week and had wanted to approach us, though she hadn’t had the courage.

Then that night, I stopped. She said she collects tracts and any other pieces of literature about God that she can find and reads them over and over. “My grandfather was a Christian. He had many books about God. When I was younger, I would read his books and feel peace. I want to feel that again. When he died, I asked my grandmother to save the books for me. But when I went to get them, they were all gone. I was very sad and angry because there were many books and they were so precious to me. My father tells me that if I want to become a Christian, I should read more. But I have no books.”

While we were talking with her, I remembered that I had put a book in my bag that morning thinking that I was going to give it to a friend I had met the night before when I saw him the next day. I felt Abba whisper to my heart, “She’s asking for it.” I discreetly unzipped my bag and pulled it out, showing it to Yai behind Suai’s back. I asked her if it was a good translation and if she felt Suai would be able to understand it. Yai said yes. So I showed Suai the book and said, “I brought this book from America, where it is very hard to find books in Thai. One day in a bookstore I found this book and knew someone in Thailand needed it, so I bought one copy. It is by a man who loves Jesus very much and it is his story of how he came to have a deep passion for Jesus. Suai, I believe that Jesus heard you, and He saw your desire for a book about Him. So He sent me from America with this book for you, just to show you how much He loves you. Will you accept this book?”

Suai nodded and reached over to accept the gift. She looked through the first few pages, and thanked me. We told her that God is a God who restores and that he will restore everything that the enemy had stolen from her. “This book is just the beginning. He will bring you many books about him.” We spent some time praying for her, asking the Lord what was on His heart for her. We felt strongly that she has a calling on her life to teach and when we told her, she replied, “Yes, I want to teach. I tell people that it is a good thing to know God.” Neil told her that God would open doors for her to be able to do that more.

After spending some time praying for her to have a great passion for Jesus, we reluctantly began to say goodbye. We asked again if she would leave and go to Tamar. She again said she could not. We left after hugs and goodbyes, saddened to leave her there but rejoicing at the beauty we had found hidden inside Suai.