“Madam! Madam!” a preteen boy in a soccer jersey tugged persistently at my arm. I smiled down at him and the assortment of neon bracelets he was trying to sell me and continued down the dark, narrow, and busy Pattaya Soi. The persistent little guy was met by a no. A preteen girl approached to offer bracelets as well. After another no, they scampered off to try their luck on a  couple more of the foreigners I was walking down the street with.  The boy ran across the street towards a bearded man in a button-up shirt and  jeans. Though surprised, Anthony reached his tattooed arms out to gently touch the little boy’s shoulders. Anthony squatted down and handed the preteen a couple bills in exchange for three of the glow sticks. The two of them formed a tricolor glow necklace that the young vendor then placed around Anthony’s neck, quickly followed by his arms. Anthony gave the boy a tight squeeze in return. Once the little guy excitedly ran on, Anthony walked across the street towards me. 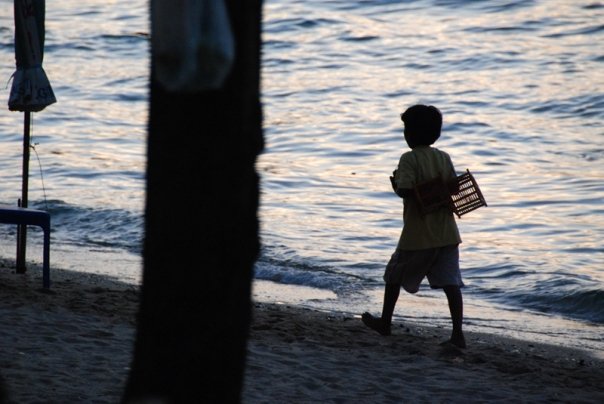 “You do know who they are, don’t you?” Anthony asked. I nodded as he ran his hand through the curls on the nape of his neck to shake beads of perspiration. “You do?” Leaning in close he said as softly as possible to still be heard over the loud bar music, “They’re selling themselves.”

I sighed loudly and grimly. I had been fully aware of that, but hadn’t wanted to believe it.

“You knew that, didn’t you?” He broke from my side after receiving an affirmative nod and continued leading the team comprised of about fifteen teenagers and young people and one middle-aged woman down the street.

I linked arms with one of the Thai teens at the back of the group, but remained deep in thought. The group stopped and Anthony corralled the youngsters close to him and began conferring with Uh-Oh, our translator. The techno music behind me arguing with a different beat from the bar across the street kept me from hearing, despite being only a couple of feet away. Scanning the scene across the lane, my eyes landed on a tall, slender figure leaning sadly against the silver pole in the center of the empty bar. Our eyes seemed to meet for a moment. Then suddenly distracted by movement from behind me, I turned to see on the other side of the the darkened window a couple of scantily dressed girls dancing smoothly and seductively to the rhythm. Catching the eye of the girl above my head, I smiled love at her, but a genuine smile was not returned. 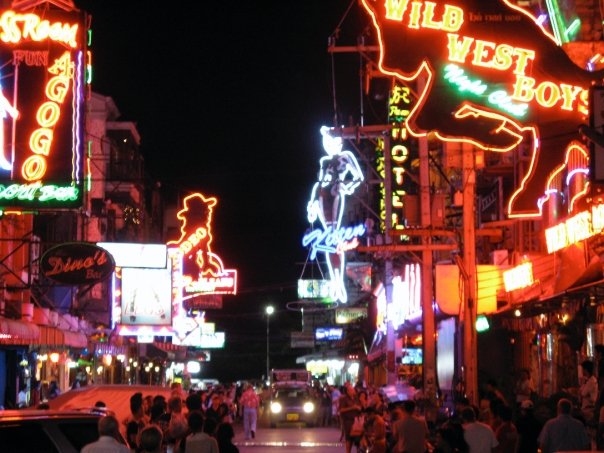 “I’m going in,” Anthony announced, turning to face us and gesturing across the street. “Who’s with me?” He glanced around the group and his eyes landed on our translator. “Uh-Oh, you’re with me.” I stepped forward to join Anthony, as did Marjorie, the older woman who was with our group.  Anthony instructed those staying behind to stick close together, then facing those those who had joined him, said,“Let’s do it.” The music hit us once we walked under the yellow neon sign and up the two white tile steps into the bar. Anthony and Uh-Oh walked up to the blue bar while Marjorie and I perched on one of the two white stone picnic tables just under the bar’s awning. I watched Uh-Oh lean in close to the female bartender’s ear to ask something. Suddenly, the two youngsters from down the street approached our table and began once again trying to sell us their wares, offering sad pouty lips each time we declined. I rested my arm against the back of the bench and suddenly found the little boy grabbing my wrist and rapidly encircling two neon bracelets around it. Somewhat shocked, I gave him a scolding look and attempted to remove the bracelets. His eyes saddened and I could no longer refuse. “How much?” “40 Bhat.” I reached into my wallet and handed him two small green bills, thinking he would give a satisfied nod and run off. Instead, the little one leaned in and pressed perfectly rounded lips against my cheek. My surprise was evident and disappointing to the little guy. He sadly pointed at his cheeks while making kissy faces. Unable to bring myself to reciprocate, I pulled him into a gentle hug.

Anthony returned to the table and sat down across from me. The boy excitedly pointed to the bracelets around my wrist. Anthony gave him a thumbs up and smiled. The little girl had stopped tugging at her polka-dotted dress and had snuggled into Marjorie’s arms. The little guy continued bouncing between Anthony and my arms until Uh-Oh returned with the tall slender one who had been leaning against the pole when I had first laid eyes on the bar. “This is An,” Anthony explained and I felt my eyes grow wide.

Uh-Oh spoke to An for a few moments in Thai. I leaned in as close as possible to make out Uh-Oh explaining in English, “I told her that we are playing a game called a treasure hunt where we prayed and God gave us clues to lead us to His treasure. And that all of our clues led us here and that her name was one of our clues.”

Anthony nodded, “What does she think about that? How does it make her feel?”

An and Uh-Oh spoke in Thai, then Uh-Oh turned to us with wide eyes and translated, “This is the second time in the seven months that An has been working in Pattaya that a group of people have come here playing ‘the treasure hunt game’ and looking for An by name. The first group of people was from England. She wants to know how we knew to come here to find her.”

Uh-Oh nodded, but reiterated the story to An with Anthony’s additions, “God is looking for you. He wants you to know that He loves you and He sees you.”

An was still concerned, confused, and frightened. “I feel heavy in my heart. I feel uneasy.”

Looking at this sweet, frightened one, I leaned my head on my Lover’s chest, “Abba, what is on your heart for this one? What is the key to her heart?” Above the pumping techno I heard the word, “Mother.”

Leaning closer to the beat of heaven, I whispered, “What about An’s Mother, Jesus?”  A rush of emotion laden words filled my soul, “There is a wound with the mother.”

Anthony looked to us, seeming at a loss, “Are any of you getting anything?”

I nodded, “There’s a wound with the mother. Like the kind of wound that would make her feel like if she had kids, she would be a bad mother.”

Anthony leaned in and told Uh-Oh to ask if there was something like that. Uh-Oh looked at Anthony, then at me, oddly. Anthony turned to me, eyebrows raised, and shouted over the music, “He’s a ladyboy.”

It was something I had known in a way, so I shrugged, “That’s the only way I have to describe it.”

Anthony nodded at Uh-Oh. Uh-Oh and An’s lips moved in seeming silence, then Anthony leaned towards me, “There is something like that.”

We quickly traded spots on the bench and I asked An if I could pray for him. With his permission, I gently placed my hand on his shoulder and prayed simply and slowly. “Jesus, come. Show An how much you love. Bring healing to this one’s heart. Wash over this heart with your love. Take away the pain.” In the midst of the chaos, I felt a wave of God’s love wash over my soul, through my being into An. “Does he feel any different?” I asked.

Uh-Oh smiled when she delivered the answer, “Yes, he feels warmth and peace.”

I smiled back. “Tell him that’s God’s love and presence.”

An began to relax. Anthony leaned in close to my ear again, “Can ladyboys go to the banquet?”

“I think so. At least back in September they were able to, as I know at least one went then.”

Anthony motioned that he wanted to get in close to An again. “It’s too important for it to end tonight. We need to get him to a place where he can just get loved on for a while. If he comes, that means you have to be there, Amy.”

I smiled, quickly scooting over to allow Anthony to extend an invitation to An to come and be lavished in love. After a few minutes, Anthony shouted, “He wants to go. We just have to get the bar owner’s permission.”  Anthony, Uh-Oh, and An moved to the picnic table behind us to talk to the bar owner. I kept close, continuing to pray. Uh-Oh translated enough to keep us in the loop. An wanted to come to the banquet badly enough that he was willing to waive the personal fee that the bar owners required and have us just pay the bar for his time. Anthony shook his head when he heard the fee for An’s time, and leaned in close to me. “Most of the girls here could go for two hours for 300 Bhat. But An is ‘special,’ so the fee is 500 Bhat.”  Something in my heart ached as I heard that, as I knew that An’s uniqueness was due to the pain so commonly associated with being a ladyboy. I heard little of what was said from that moment until we told An goodbye and left the bar’s awning, promising to come back Friday evening to pick An up for the banquet. Through the whirlwind of activity of the next two days, An remained at the forefront of my mind. I prayed that Abba would continue to let An feel His pursuit and that at the banquet, something would shift for this man. When we arrived at the bar to meet An, I was so blessed to be the one to walk with him back to the Sunbeam Hotel where a feast of love had been prepared.

Throughout the banquet, An and I made small talk using his limited English. We laughed as those around us participated in silly games and cried as The Tamar Center staff shared their stories of how they had entered into the bar scenes and how the Tamar Center had helped them leave the bar and find a better life and the true love found only in Jesus. At the end of the night, I prayed with several of the girls at my table and let my shoulder catch their tears. I prayed for An as well, but little seemed to break. At one point, I noticed Kelsey, the teal-haired momma whom I had befriended during Extreme Prophetic’s school that week, praying for An. Before leaving, An thanked me for bringing him, telling me he had a good time but had to go. I hugged him and said I was glad he had come and as I watched him go, something in me broke. This one so pursued, this one so sought after, still felt forsaken.

Once the girls from my table had all gone home, I approached Kelsey and asked what had happened with him. “Nothing really. I just felt like he was really sad and I prayed for him.” Emotions I could not express well to her or anyone else overflowed from my eyes. “I just want them to have a way to leave the bars,” I explained through the tears. “Every girl in here tonight had the opportunity to leave if they wanted to, but An didn’t. I want justice to come for him, too.”